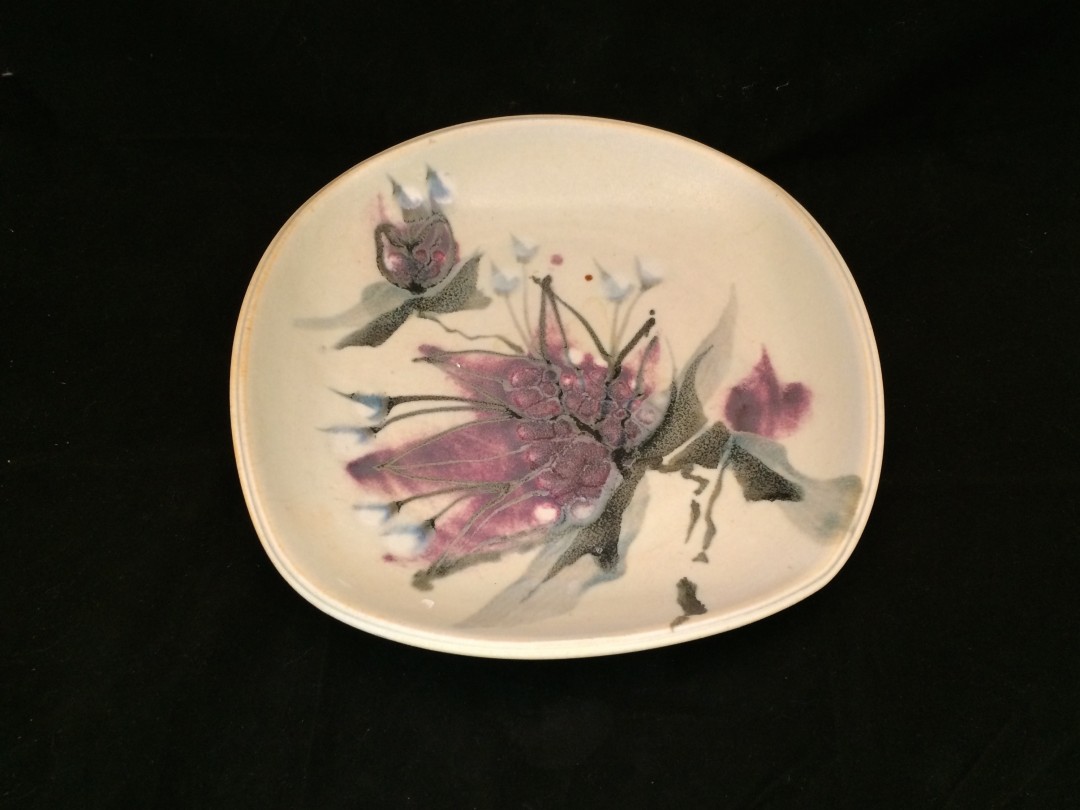 Robin Hopper is one of the most sought-after workshop presenters in North America.  In addition to the five books he has authored (Functional Pottery, The Ceramic Spectrum, Making Marks, Robin Hopper Ceramics, Stayin’ Alive, plus the revision to Daniel Rhodes’s Clay and Glazes for the Potter), he has been the subject of multiple educational videos on ceramic topics ranging from handbuilding & throwing to surface decoration.  Right before his workshop at Bracker’s began, Robin looked at the stack of bats near the wheel, and said (with his lovely British accent) to David Sturm, “Yes, I’m going to need more bats, lots and lots of bats.”  David nodded somewhat absentmindedly, unconcerned with any immediacy of the need. When the workshop began, Robin threw down a lump of clay on the wheel, looked at the participants and said two words…”don’t blink”, and fifteen seconds later, the bat, containing a finished plate, ready to trim, was lifted off the wheel and set aside, and Robin reached for another bat.  Dave looked at another employee and hurriedly said, “yeah, we’re gonna need some more bats!!!”  It was the first of many memorable moments at that workshop.  Enrollment for this workshop went fast and furiously and soon we had 28 people from Kansas, Missouri, Nebraska, Iowa, Colorado and Arkansas on the list, which exceeded Robin’s typical workshop limit of 25, but we snuck in those three extra people. Ever the showman, Robin didn’t mind a bit.  That man was born for the stage!

This very full workshop contains an array of thrown work, principally to serve as vehicles for surface enrichment.  Decoration process are likely to include colored clay work, such as agate ware, neriage and millefiori style blockmaking, traditional slipware, mishima, majolica, brushwork, underglaze, and other glaze application and decoration.  Accompanying videos serve to complement the on-site demonstrations for processes which are either not possible in the time available or too complex to do in a workshop demonstration.  Also included will be a digital keynote address based on the content of my most recent book ROBIN HOPPER CERAMICS that traces personal history, idea and development of work and philosophy over an extensive (50+ year) career in Ceramics.

Robin Hopper is an internationally known potter, teacher, author, garden designer and arts activist. He has taught throughout Canada, and in England, U.S.A., Australia, New Zealand, China, Korea, Japan and Israel. His ceramic work is in public, corporate and private collections throughout the world. He was born in England in 1939, and trained there at Croydon College of Art (1956-1961). He has developed studios in both England and Canada, where he immigrated in 1968. After two years teaching in Toronto at Central Technical School, he set up and headed the Ceramics and Glass Department at Georgian College, Barrie, Ontario. In 1972 he resigned from teaching to devote full energies to his work in ceramics. 1977 included relocation to Victoria, B.C., Canada, and becoming the first recipient of the Bronfman Award, Canada’s most prestigious annual award in the crafts. He is an honourary member of NCECA. He is the author of “The Ceramic Spectrum”, “Functional Pottery”, “Staying Alive”, “Making Marks”, a new edition of Daniel Rhodes’ “Clay and Glazes for the Potter”, and his autobiography, “Robin Hopper Ceramics”. For more information on his books please go to the Books and Videos page. He has written many articles in major international ceramics publications. He is the Founding President Emeritus of the Metchosin International Summer School of the Arts.

In 1993 he developed a series of six educational videos on ceramic decoration processes titled “Making Marks”, based on research material for a book of the same title. In 1994, a second series of five videos on design and aesthetics was produced, titled “Form and Function”, and based on his second book “Functional Pottery”. Since then he has made “Beginning to Throw on the Potter’s Wheel”, and “Advanced Throwing”. The videos and now DVDs are commercially available through PotteryVideos.comor from our own showroom. Robin’s work in ceramics over a 50 year period includes a great deal of ceramic historical and technical research, and an ongoing studio involvement with one-of-a-kind art works, primarily in porcelain and now his new interest in the area of glaze paintings.

Next to ceramics, good living and travel, his other life-long passion is gardening, particularly the research into and love of Oriental gardens. His “Anglojapanadian Garden” at ’Chosin Pottery has been featured in books, several television programs and many magazines.

Robin has just written a new eBook called “A Potter’s Garden – An Artist’s Approach to Creative Garden-Making”. This book illustrates his award-winning garden and the influences and inspiration that it has had on his pottery. It is the story of a very personal garden and its development through the eyes and mind of an artist. It is about creative garden-making. It is $9.99 US and can be downloaded at Smashwords. Note: for optimal image-viewing, the book is best viewed as a PDF.

PLEASE ALLOW ME TO INTRODUCE MYSELF, I’M A MAN OF CLAY AND GLAZE, PUSHED MUD AROUND FOR SEVENTY YEARS, OR TWENTY FIVE THOUSAND DAYS.

Robin Hopper is a man of many parts, mostly worn out, rusty or dysfunctional, due to a lifetime of excesses! He started working with clay at the age of three and is still doing it over 70 years later. His lengthy, peripatetic career as a mudpusher has included side trips into working as a Professional Actor, Stage Designer, Property Maker, Stage Manager, Stage Carpenter, Grocer, Greengrocer, Jazz Musician, Teapot, Wine and Beer-Bottle, Trumpet, Trombone and Bugle Player, European Travel Guide, Founder of Several Clay/Art/Craft Organizations, Alchemist, Geologist, Primatologist, Linguist, Ornithologist, Botanist, Ceramic Historian, Educator, Author, Garden Designer, Lecturer on Japanese Garden Design, Laborer and Star of Stage, Screen and Potter’s Wheel!

For more information about Robin Hopper, visit his website, Chosinpottery.ca or check out his blog and his FaceBook page.