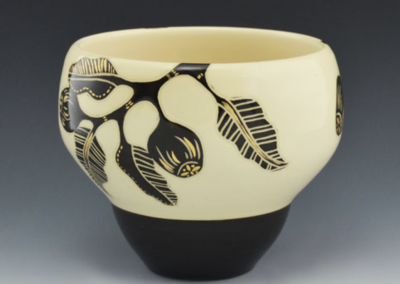 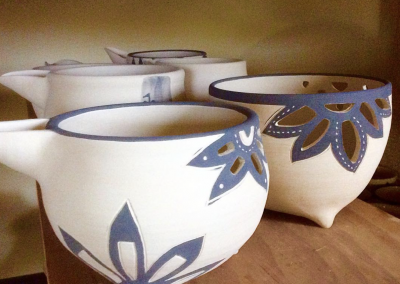 “My work is the result of these ‘moments of bliss’ while working with the clay and expresses my belief in the connectedness of all beings and appreciation for our surroundings, which make us what we are”. Reiko Miyagi is a renowned artist whose impactful and graphic work shows a passion for the ceramics artform and a true talent for intricately weaving her inspirations together. Born in Japan, Miyagi draws much of her inspiration from her time there and strives to produce her own version of an ancient Japanese belief; ‘Yaoyorozu no kami’ – or literally ‘god in eight million things’ – is the ancient Japanese belief that all beings and objects have a spirit and divinity within. Born and raised in Japan, my aesthetic sensibility was largely influenced by the traditional art and crafted items that reflect this philosophy. With my pottery I use black slip on white stoneware and sgraffito technique to draw my own ‘yaoyorozu no kami’”. “I think ‘inspire other artists’ is the end result of achieving good art rather than something to hope or aim for so I just try to make good and original art that I could approve of myself. 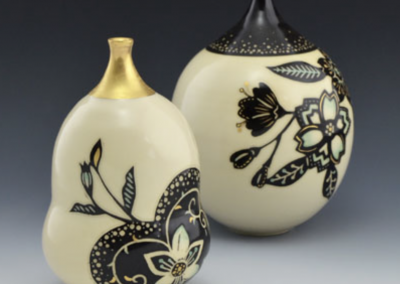 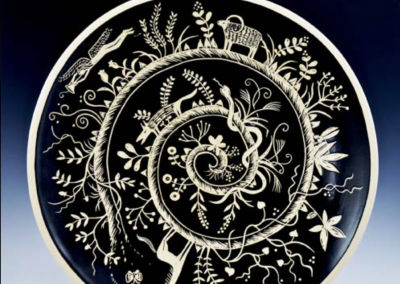 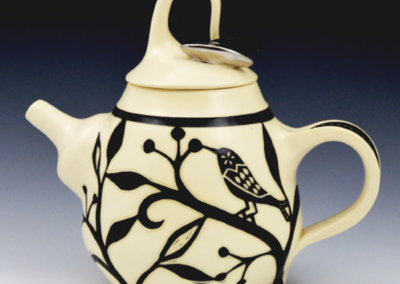 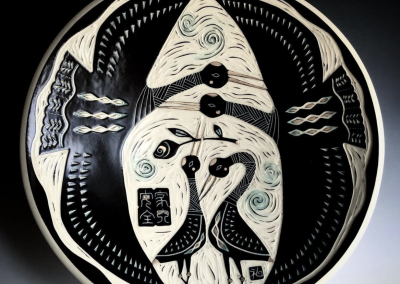 Having worked in the Mashiko area of Japan, renowned for folk pottery, and apprenticing at the Tsukamoto Ceramics in Mashiko, Miyagi explained that her entrance into the ceramics world seemed like a natural choice; “Japan had too much attractive pottery, both new and old, that it was hard not to get absorbed in it. I started as a pottery viewer/user but soon I started to think I want to make myself”. In 1998, Miyagi moved to the San Francisco Bay area and continued her exploration of clay before ultimately founding her own studio, Studio Tabula Rasa, and developing the black & white sgraffito stoneware pieces that she is now known for. Her amazing talent and unique work has earned her a showcasing spot at various prestigious shows including the American Craft Council Show, the Smithsonian Craft Show, and her work resides in the permanent collection of the Charlotte Mint Museum. Miyagi explained that she has many inspirations, but that Japanese aesthetics are still an integral part of her art; “I like seeing historic work and tribal art but honestly the inspiration comes from all kinds of things that surround me. As I mentioned on my art statement, I was largely influenced by the Japanese subtle and organic aesthetic which contains the love and respect for the beauty of nature and was refined through a very long history of culture and making arts and crafts”.  In her artist statement, Miyagi speaks to the interconnectedness of the “now”, “past”, and “future” moments in her pieces and how that relates to the end user. Miyagi said, “For me, the ‘now’ moment created by working with my art is also a moment to connect my ‘past’ and ‘future’. The ‘past’ is all of the inspirations that make it possible for me to make my art what it is”. Miyagi pulls inspirations from many places, both present and past, including historical works and the nature and beauty surrounding her, but it is the moment when the work passes to the new owner that represents the future; “Once I finish an object it is passed to a ‘future’ moment. I think of the people who introduce my work into their daily life and are enjoying their ‘now’ moment”. Through her travels and studies, Miyagi has been exposed to many different types of processes and mentors. When asked about one of the most difficult challenge in her ceramics journey, Miyagi said, “A wood kiln camp visiting potter experience I had while in school was physically tough tackling with a traditional-style nobori-gama. Also managing the gas firing process at the schools’ kilns was always mentally difficult for me because I’m not very good at science”. Miyagi counts herself very fortunate to have been exposed to so many talented mentors and teachers during her education. She explained that, “Our school had teachers with all different fortes so we were able to study a wide range of skills and knowledge. Also some of our teachers had studied at the best art college in Japan and they were toughened by the living national treasure class teachers they had so I was fortunate to get exposed to a very high level of craftsmanship”. Perhaps having been exposed to such impressive mentors is what has inspired Miyagi to have such a dedication to her practice and to constantly strive for perfection. When asked what her best contribution to the ceramics world was, Miyagi said, “I feel that I haven’t made any contribution or great work that I can be proud of yet and need to keep making the effort to achieve this someday”. It is clear that in an effort to constantly improve, Miyagi has reached amazing levels of success with her unique and gorgeous work, and the possibilities for how her career may continue to grow are limitless.
While Miyagi has found incredible success in the ceramics industry, she understands the opportunities that exist within experimentation and even failure, and said, “I tend to be afraid of failure but I know failure sometimes leads to the new creation, so I want say to myself and others to not to be afraid to get out of our comfort zone and make mistakes”. While many would describe her work as beautiful, amazing, and inspirational, Miyagi prefers to think of inspiration as the by-product of making good art; “I think “inspire other artists” is the end result of achieving good art rather than something to hope or aim for so I just try to make good and original art that I could approve of myself. To get close to the goal of making good art, I repeat study (input) and make (output) and have and an eye to be able to give a self-critique to examine and improve my own work”. 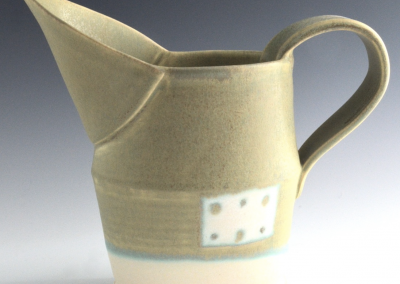 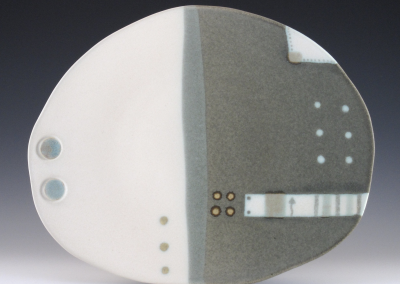 Through the unique nature of her work Miyagi has been able to carve a niche for herself by producing pieces that are always stunning and the viewer constantly recognizes as a Reiko Miyagi piece. When listening to her advice for other emerging artists, it’s clear that she uses this advice when creating her own pieces: “The advice for other artists would be to be original, establish your own style that a viewer can recognize that it is made by you. Without that type of ‘character’ or ‘identity’ of your work it will be difficult to earn your supporters. So explore different styles as a beginner but establish your own style that represents your character”. Through a constant dedication to the refinement of her process and a belief in constant improvement, Reiko Miyagi has proven herself a successful force to be reckoned with. Her inspirations pull from the best parts of history and the present to produce art that pioneers an inspiring future for other artists. By simply focusing on the concept of “making good art”, Miyagi manages to blow that bar every time and create work that is simply stunning.

Think about the “character” and “identity” of your work – what about your work makes it undeniably yours?  Take some time to explore your inspirations, processes, and techniques with an understanding of how you want the end product to be recognizably yours.