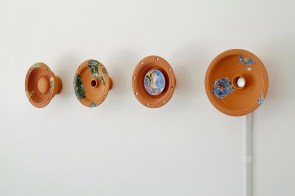 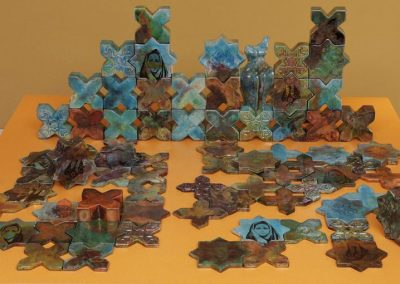 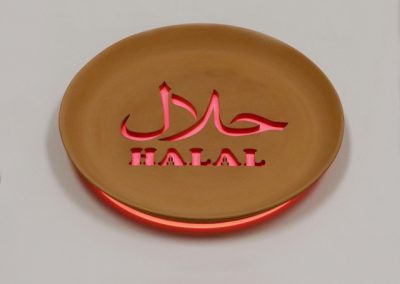 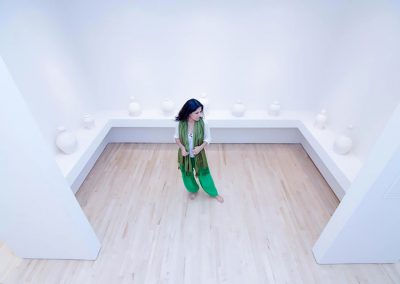 Raheleh Filsoofi is a multi-media artist who utilizes ceramics as an integral and often central element in her work. She was born and raised in Iran during a time of revolution and war. Feeling stifled and repressed by the laws of her land, she decided to emigrate to the US in order to pursue her artistic career. Hoping to have more freedom to use her voice and express herself. This was not her initial experience. However, the experiences of childhood and of coming into her own as an artist and person in a country rather less welcoming than one might hope have greatly influenced the direction and tone of her work.

When I started researching Raheleh’s work I was immediately drawn in. Visually the lines of her work are very clean and pleasing. Sometimes creating simple, universal type forms, and other times more elaborate and decorative shapes that eco back to her heritage. What drew me in further were the titles. I love how she titles her work. Simple phrases or words that sound poetic and somehow manage to convey the weight of emotion that she wants the audience to feel.

One such work was an installation called “Only Sound Remains”. I watched the video she created of herself entering and interacting in the space dedicated to this piece (https://www.rahelehfilsoofi.com/only-sound-remains) and found myself wishing I could experience it first hand. Sound is another element she often uses in her work, and with this piece she had created several lidded vessels, each containing a different recording that could be detected filling the inside of the pot, but when the lid was lifted became clearer, inviting the listener in, sparking curiosity and feeding exploration. It is the way she awakens multiple senses which allows her to bridge the gap between cultures by creating an elementally human experience. And the elegance of her work makes the viewer want to interact, learn, and become aware rather than shy away from the issues being presented.

Check out her website www.rahelehfilsoofi.com you’ll be all the richer for it! Raheleh is an itinerant artist, a collector of soil and sound, feminist curator, and community service advocate. Her work synthesizes socio-political statements as a point of departure and further challenges these fundamental arguments by incorporating ancient and contemporary media such as ceramics, poetry, ambient sound, and video; aiming for a holistic sensory experience. Her interdisciplinary practices act as interplay between the literal and figurative contexts of land, ownership, immigration, and border.