“I use traditionally inspired crafts to explore the weaponization and radicalization of aspects of our society against those people and spaces that need the most protection.” PJ Anderson is an incredible artist whose art explores identity concepts and the challenges that come with navigating them; identity, culture, and how these are, or often times are not, handed down through generations. Anderson’s pieces open up a dialogue for important conversations and invite the viewer to consider what we are as people, and what we could be if we considered the human experience on a broader spectrum; “All the weaponizations I have explored through Clay and Fiber amount to what is essentially the lack of a space to prosper in the ethnic or cultural skin outside that of the default western, cis, straight, male paradigm. What can we accomplish when we include the entirety of human experience into our concept of what is right and good instead of just a miniscule section? I am inviting my viewers to look and imagine how much more we all could be”. “I feel each piece is more of a love letter to my Ancestors.  I write to them in clay, acknowledging the past and how it has brought me here, to this place, and how they have shaped what we all have become.” 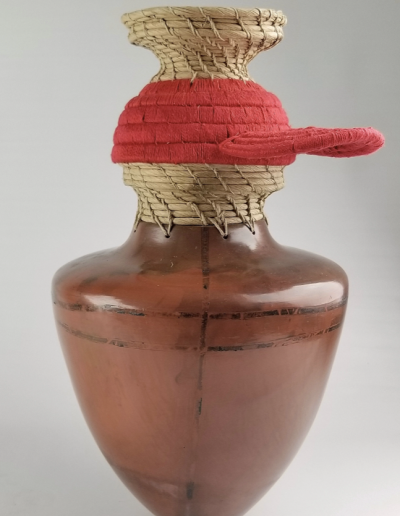 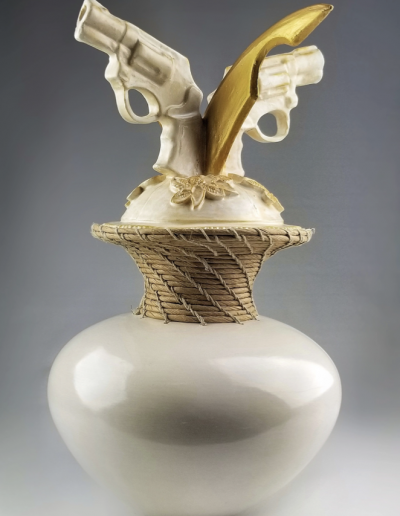 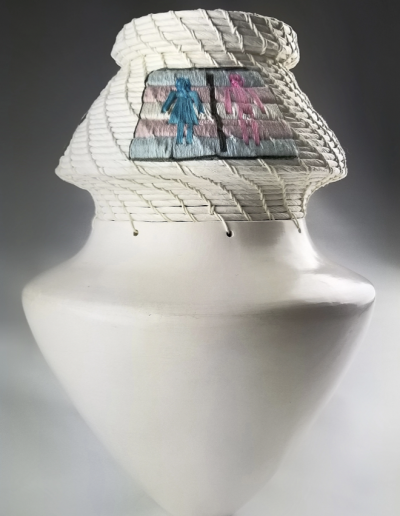 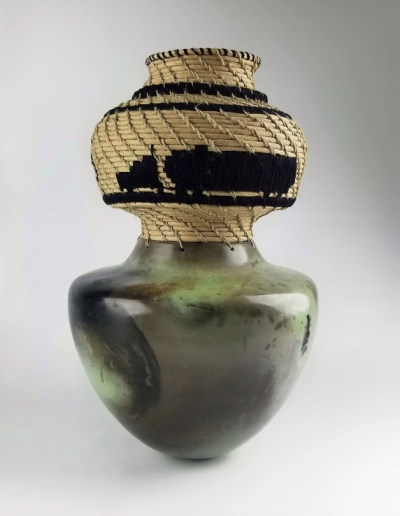 Anderson happened upon ceramics in art school, and a mentor named Grace Nickle played an instrumental role in Anderson’s journey into the medium; “ I started in ceramics because of the 3D requirement in art school. While in ceramics, Grace Nickel told me about Magdalene Odundo, this was the first time any of my professors directed me to an artist of colour, ever. This made me feel that ceramics is a medium where black women can not only excel but be considered as an example of excellence. From Odundo, I discovered Maria Martinez and Lucy Lewis other examples of women of colour who embody excellence”. Grace Nickle also played a large role in helping Anderson grow and explore unchartered territory in her artistic career; “The best challenge by a mentor would be from Grace Nickel, who has encouraged me to do things I don’t already know how to do…for example, during my graduate studies (that im in the middle of now) she reminded me that I already know how to make a perfect coil pot, grad school is for doing things you don’t do in your everyday practice”. Anderson explained that, “my work explores Global (broadly) and Canadian (specifically) social and political identities and their expression. There is a widening gulf between the perception of the Canadian self and the reality experienced by marginalized people within its boundaries – this is especially apparent in our expression of self and space on digital platforms. This reality conflicts with the perception of what many Canadians believe Canada to be. I’m wondering how the possibilities/probabilities of social/political factors unfold in the coming days, weeks and years, both in the real world and increasingly in its digital manifestation”. Anderson also draws on her own experiences with identity and culture; “My work draws from the longing for connection to cultural resources that were lost to the colonial machine. Hundreds of years removed from the involuntary migration of my Jamaican and Aboriginal peoples, I still feel a strong kinship to their traditional crafts of basketry and ceramics. We have very few stories or skills passed down, because they were forbidden. I was trained not by a grandmother or an elder but an art school. It is an uneasy thing, to learn about one’s own cultural heritage from elective classes, taught by Scholars and Anthropologists not members of that group. I also struggle with the realization that without these scholars and anthropologists I would know very little about the cultures from which I was born; the stories about my past kin-people would be largely forgotten”. Anderson also dives into the relationship that technology has played in the shift from local communities to a global society; “I am referencing ancient techniques but exploring the very recent new technologies that have changed us from a series of local community to a global society connected through avatars, devices and media. A society that continues to favour a colonial western paradigm that omits or actively suppresses the stories of those outside that framework…something I very much would like to disrupt through the creating of a place for one’s self in the future, replete with one’s culture, stories, and ideals is at the heart of my explorations”. Anderson’s work forces the viewer to take a hard look at how all of these different factors have influenced their own view of society, culture, and ideals and what else exists outside of this framework. She explained that her pieces are akin to “love letters” that explain the journey from past to present; “My work is informed by that uneasy relationship between my indirect knowledge of my ancestors; from the coil and burnish technique used to build the ceramic vessels, (a fabrication method used by both African and American Aboriginals) to the coil woven additions (again, both used in African and Aboriginal Craft production) to how I strive for a connection through using these techniques. There is no implication that my work is African or Aboriginal; I feel each piece is more of a love letter to my Ancestors. I write to them in clay, acknowledging the past and how it has brought me here, to this place, and how they have shaped what we all have become.” Anderson’s incredible work has made its mark on the industry as she finds success along her artistic journey; she had her installment “3 Works” premier with the Gardiner Museum in May, and served on this year’s NCECA board as Director at Large. She regards her work and research into coiled and burnished pieces as her greatest accomplishment during her ceramics journey; “My best accomplishment has been my coiled and burnished research. I’ve travelled to South Africa twice to work with Zulu Potters and New Mexico. A chance to meet and learn from Artists outside of the Academic schools who are working from intergenerational knowledge intimately connected to place. As both of my major ancestral groups have been removed from their connection to traditional knowledge, specifically in terms of craft production, it gives me a sense of connection, albeit a tenuous one, to both my Indigenous and African ancestors relationship with clay”. The road to success hasn’t been without obstacles though. Anderson said that, “One of the challenges has been one of visibility. I’ve been working in clay for over 10 years and it is only in these last few years that those outside my local community have expressed interest. There has been a real push to find and promote artists of colour, which has been amazing. I’ve met so many artists in recent years who have been quietly being amazing who are being amplified, it doesn’t feel as though I’m the lone potter of colour on earth anymore and its fantastic”. Anderson hopes to be a source of inspiration to other artists of color and said that, “I hope very much to encourage black and brown artists in clay. When I started in ceramics, there were so very few ceramic artists of colour that were well known, that to find them you needed to seriously search. It is much easier now with Instagram and the colour network but the momentum needs to continue. My advice is to find other artists of colour, support each other and work together to help each other be seen”. There’s no doubt that PJ Anderson’s incredible work and compelling story will inspire and resonate with many in this industry as she continues her successful career. Her work pushes the audience towards the dialogues that need to be happening and challenges them to reevaluate what is “known”, while always reimagining a beautiful piece of art. “I hope very much to encourage black and brown artists in clay.  When I started in ceramics, there were so very few ceramics artists of colour that were well known, that to find them you needed to seriously search.  It is much earier now with Instagram and the colour network but the momentum needs to continue.”

“My advice is to find other artists of colour, support each other and work together to help each other be seen.”