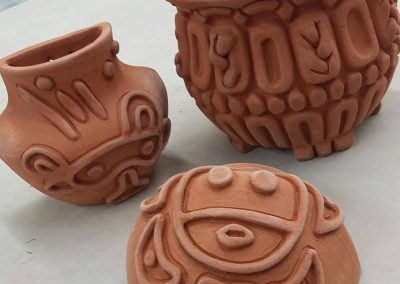 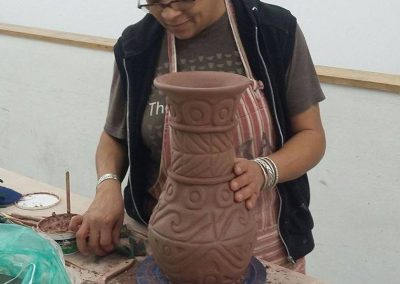 Art is a space that is supposed to be for everyone, where everyone’s artistic expression is accepted and celebrated. All too often though, it’s clear that there is a mold for what is accepted as “art” and that a disparity exists concerning access for bodies of color. Nitza Walesca Sierra openly discusses this disparity, but more importantly, has been actively working to close the gap while making it clear that all art is “art”. Nitza Walesca Sierra is a Puerto Rican artist whose work is always identifiable from her use of carvings. In fact, Walesca Sierra described that one of the main reasons for her to create was so she could have a surface for her carvings; “My reason for carving is to share my culture. I want as soon as people see my pottery, I want them to know that a brown face created this.” 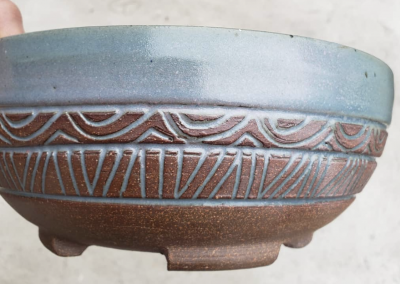 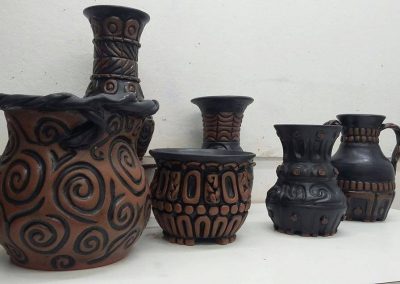 “I am a firm believer that clay heals minds, and that my work is to share the Tainos, the indigenous people of Puerto Rico.” Walesca Sierra explained that, “Puerto Ricans’ are 3 races in one; the Spaniards from Spain, the indigenous people [Taino] from the island, and also the African slaves that Christopher Columbus brought over” and all of these cultures influence her work to some degree. Her carvings and her work are her way of sharing the beauty of Puerto Rico and the Taino culture with her audience. She even named her daughter, Taina, after the indigenous people. Recently Walesca Sierra has been working to “go tall” and be able to craft larger and taller pieces so that she has a larger surface to display her carvings. She said that it has been one of her biggest challenges in clay but that she is now able to stack pots and throw 20 pounds of clay for her pieces. Walesca Sierra explained that having a larger area to carve on has helped her to improve and that many have commented that her pieces now seem to be “carved more purposefully”.

Walesca Sierra said that part of her legacy that she hopes to pass on is that “Clay heals minds”, but she also noted that there needs to be more and better access for bodies of color to ceramics since it is such as extremely expensive art form. She recalled that part of the reason she became an intern for the Clay Studio, was because tuition for the ceramics classes was too expensive, but interns got to take a class for free and had access to the studio.  Walesca Sierra has been actively working to bring clay to others through her work with the Clay Mobile Project at the Clay Studio. During her time with this project, she would give people an opportunity to experience clay, and really evoked the idea that “Clay heals minds”. She visited Women Against Abuse shelters and juvenile detention centers and provided access to the ceramics medium that these groups otherwise would not have had. She recalled several stories about her experiences and recalled that the children who were incarcerated showed strength in the face of overwhelming negativity. There was one boy who was playing with fake money, pretending it was real and gave her one of his paper bills. Walesca Sierra, who still has the paper bill to this day, said that, “it humbled me because he’s locked up like a man but his mind is still like a child – he’s playing with paper money and acting like it’s real and just having such a damn good time about it. Each one of those kids teaches you how to be real”. When the Clay Mobile would visit juvenile detention centers, they would bring projects for the kids to do; while some just saw this as free time and just enjoyed having something different to do, Walesca Sierra saw that the clay really lit a passion in others and that either way, clay was healing minds. She recalled one girl in particular who was never satisfied with the projects that had been planned and instead always had her own ideas and was clear about what she wanted to make – “She would plan out her own projects and she was just waiting for the clay, just waiting for the class”. It was children like this that Walesca Sierra wishes the program could follow after their release and continue introducing to clay. 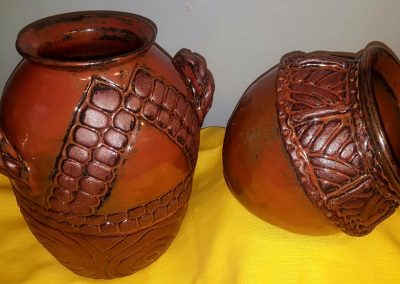 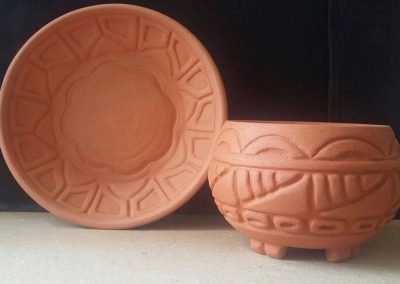 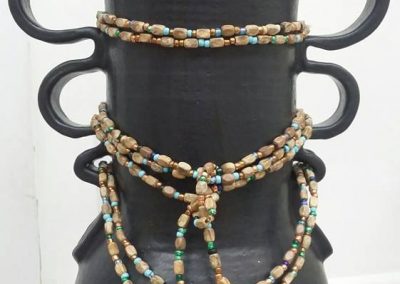 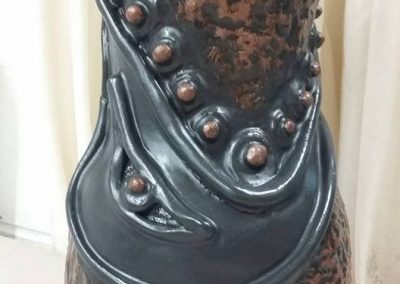 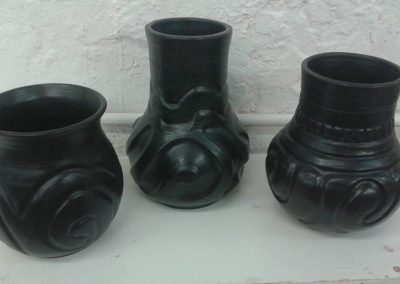 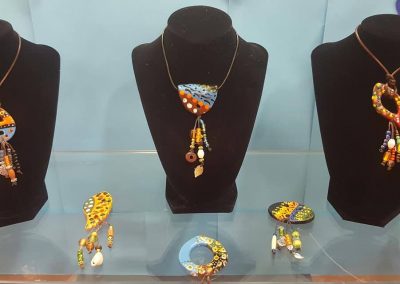 Walesca Sierra explained that she was “introduced to clay by a mistake”. It was her teacher Mr. Foreman at Conwell Middle Magnet School who first introduced Walesca Sierra to clay in 7th grade. She fondly described her memories of him bringing in clay and his “little baby kiln” and giving the students their first experience with clay. She noted that if it weren’t for him, she probably never would have had the opportunity to experience clay or enter into the ceramics world. The Clay Studio in Philadelphia has been instrumental in her journey, as she does not have an academic background in ceramics and completed most of her training and learning there. Walesca Sierra describes herself as a product of the Clay Studio as she took her first class there in 1993, has been an intern for the organization, and now works and teaches there. She has also taught at Black Hound Clay Studio in West Philadelphia, pre-covid, and said that she is “honored and humbled that without the academics, I’m being respected in the field and I’m looked upon as a teacher”. Walesca Sierra noted that there are still major problems with the way that art from non-white bodies is perceived. She said, “I think that the problem with brown artists trying to get into galleries is that our art is thought of as a craft – that our pottery is not ‘ceramics’, they see it more as a craft or folk art. Like it’s not real ‘art’.” Even the Clay Studio, which Walesca Sierra loves and cherishes, “does not promote brown faces, and needs help in that aspect”. As someone who has worked within the gallery of the Clay Studio for the last 4 years, she said that there were probably 4 brown faces within a sea of over 100 artists in the gallery. Despite this trend, Walesca Sierra has just recently been asked to have her first exhibition at the Clay Studio and is extremely excited and honored to be featured. She also hopes that this will help increase accessibility to the gallery for other bodies of color. Walesca Sierra is an incredible artist and her work to improve access to the ceramics art form and bring clay to others speaks volumes of her own experiences and the legacy she hopes to leave for others. When asked if she had any final thoughts she wanted to relay she said, “I am a firm believer that clay heals minds, and that my work is to share the Tainos, the indigenous people of Puerto Rico.” Part of the Nitza Walesca Sierra’s legacy, and the message she hopes to spread,  is that “clay heals minds”.  Clay helps to foster inspiration, provides a platform so share your stories, and provides an outlet to allow your mind to heal and escape.

Take a moment to think about how clay has healed your mind; what does the art form allow you to say that you otherwise wouldn’t be able to, and how does it help you escape from your everyday life?  Then, think about ways that you can share that experience with others – who can you bring into this art form that otherwise might never get to experience what you love?