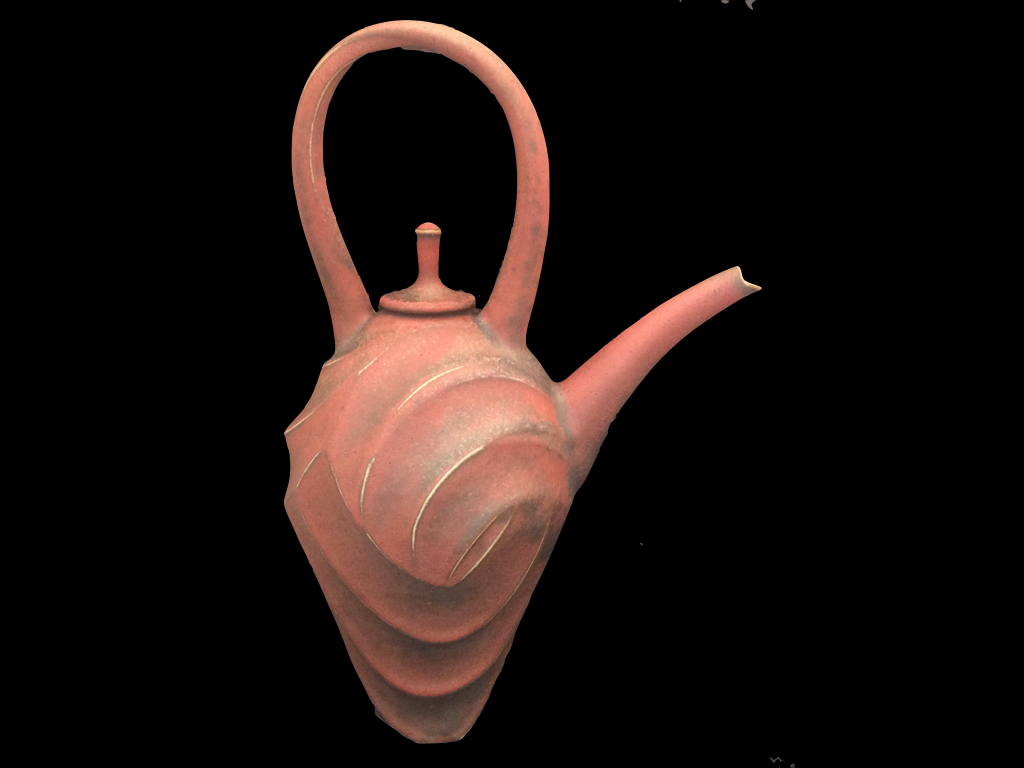 After being outbid on a beautiful Jim Connell Vessel in an NCECA auction, Cindy Bracker sought him out to obtain a piece the “old fashioned” way.  Despite his busy schedule as the NCECA onsite liaison at the 2001 NCECA conference in Charlotte, Jim took the time to select two teapots from his studio and bring them to the conference for Cindy to give as a gift for her mother.  But Cindy didn’t stop there.  Curious to learn more about Jim Connell’s process, she inquired about workshops.  His approachable nature and willingness to teach make his workshops extremely popular and well-attended and in June of 2003, Jim Connell wowed nearly 20 Kansas, Missouri & Colorado residents with explanation and demonstration of his techniques.

During the two day workshop, Jim will focus on throwing, trimming ,paddling, carving, and assembling various forms such as teapots, lidded jars, bottles, vases, mugs, and bowls using both stoneware and porcelain clays.  He will demonstrate the functional and decorative aspects of his work, including faceting techniques, glazing and firing.  He will also discuss his sandblasting methods (not demonstrated due to equipment and safety considerations).  Jim will also present a slide show of his personal work, as well as the historical works he has found inspirational.

Working in ceramics since 1975, Jim received his B.F.A from the Kansas City Art Institute and his M.F.A. from the University of Illinois.  He is currently the Professor of Ceramics at Winthrop University in Rock Hill, S.C.

Connell’s work is inspired by nature and guided by historical precedent. A major source of inspiration and stimulation comes from the teapots made in Yixing, China. His uniquely styled wheel thrown and carved work is typically made of stoneware or porcelain and often sandblasted after the final firing to achieve unique textures and highlights of gloss and matte surfaces.

I strive for beauty and elegance in my pieces. On my very best days in the studio I get glimpses of it and it keeps me going. It is all about that eternal elusive quest for beauty.

My work is inspired by nature and guided by historical precedent. I was taught, and, now I teach my students, to look to the past for ideas and inspiration. I have always looked to China for my main source of inspiration. My love of Chinese ceramics was originally centered on the work of the Sung Dynasty. I deeply admired the great porcelain pieces of this period and they profoundly affected my understanding of form and proportion.

Over time, I began to appreciate and value the work of other Chinese periods. The Chinese Prehistoric Neolithic and the Tang Dynasty caught my attention. And lately, I have begun to draw a major source of inspiration and stimulation from the teapots made in Yixing, China.

I simply love making teapots. They are a challenging and demanding discipline but when mastered they can be a very satisfying endeavor.

We are thrilled to be able to include this beautiful Jim Connell Ewer pieces in our exhibition, available until the show closes on March 26th.

You can learn more about Jim Connell on his website