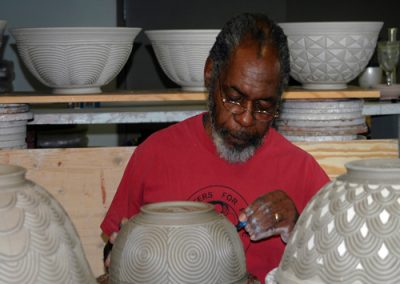 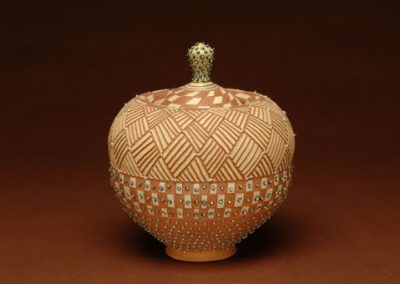 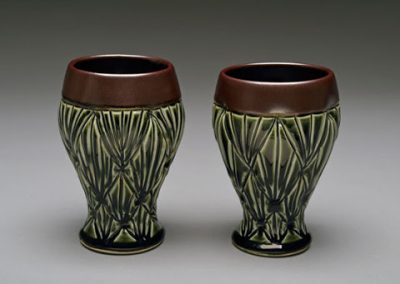 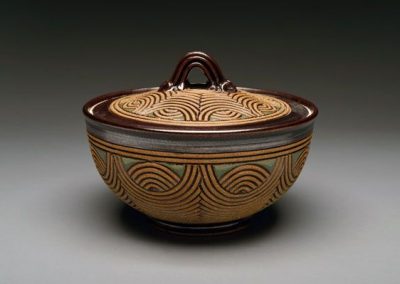 “The principal concern of my art is the articulation of the magnificence and nobility of the human spirit; and a celebration of my African heritage. ” – David MacDonald ( a snippet from his artist statement) You might have seen the work of David MacDonald, either online, at the Everson Museum of Art in Syracuse, The Studio Museum in Harlem, the Montclair Art Museum in New Jersey, or in my office at Brackers in Lawrence. The last image shown here is the plate of his that i bought from an NCECA silent auction YEARS ago  (Yes, this is Cindy writing again).  I was very excited to bring that beauty home, and that was long before i had met Mr. MacDonald or knew who he was, i just admired his work.  I really loved the carving… the precision, the detail, the symmetry, and the beauty of the work.  I liked to take my fingers and trace along the raw clay of the raised ridges from the carving, or press my fingers into the crevices and feel the smooth glazed surface.  Both visually and tactiley, it was comforting, like an old friend. I didn’t know at that time that he was inspired by the art and craft work of sub-saharan Africa., and i believe somewhere my mind made a connection between his work and the work of Asante’s that i grew up with.  Some years passed and i eventually found my way to the NCECA board, and at my first conference as a board member, MacDonald received the Excellence in Teaching Award.  That was the first time i met him.  It was a little like meeting a rock star, and i’m sure he wouldn’t remember me at all.

Several more years and I found myself on the board with one of his former students, Mary Cloonan, who just could never stop saying wonderful things about him.  Our paths crossed again at the 2018 conference when he, along with David Mack, Balise DePaolo, Jim McDowell & April Hyes presented a panel discussion on Dave the potter, HBCUs and clay.  I later edited that video and posted it to the NCECA YouTube Channel. (linked here)

I also encourage anyone reading this to visit MacDonald’s website and read the rest of this artist statement a bit more of his history.  Explore the pages with images of his pottery, linger for a while and immerse yourself in its beauty.