“The moments when I switch languages in a conversation, I aim to create meanings in the communities that I engage in.”

“Through making hybrid objects that explore how colonialism contributed to code-switching in a post-structuralist way, I portray how cultures collide with tension and harmony at times, as well as the flexible nature of how things come together.” Cindy Leung is an incredible artist who uses her global experiences and identity to create pieces that catch the eye just as much as they take the viewer’s breath away. Leung explained that, “My sculptures involve references that point to the colonial history of Hong Kong. Although the references can be subtle sometimes, they are mainly silk, porcelain and/or tea”. By focusing on the complex nature of linguistics and code-switching through a post-structuralist view, Leung magnificently captures how these concepts shape experiences; “My birthplace is often called “a borrowed place on borrowed time”. Growing up in it, I never understand the passage of time. When I relocated repeatedly and acquired multiple languages, I started to question the complexity of my identity through the linguistic approach.”. Leung first became interested in ceramics through one of the most iconic ceramics movie moments; “I was interested in pottery at first because of the movie Ghost. But I soon discovered my passion for sculptures”. As Leung explained, her work is heavily influenced by code-switching and a post-structuralism view; “I look at post-structuralism as a way to experience life fully by understanding all the possible meanings of words. The moments when I switch languages in a conversation, I aim to create meanings in the communities that I engage in. This code-switching phenomenon became an essential part of my research and life”. She’s currently working on her latest collection, A Borrowed Place on Borrowed Time, which consists of 26 materially hybrid objects and as she explained, “is based on my research in the exchange of languages and my diasporic experience”. The number of objects, 26, is merely one tool Leung uses to capture her inspirations; “This number is determined by the computer input method called Sucheng, in which 26 English letters are paired with 26 Chinese characters for typing Chinese. By interpreting the Sucheng system within the composition of my objects, I bring out the essence of code-switching, which is a common practice among multilinguals”. Leung also said that the materials she chooses to use have been carefully thought about and bring another dynamic layer to her incredible pieces; “It is crucial for me to make the objects out of silk, tea, and porcelain because they played significant roles in the history of trading and the subsequent British invasion of China. While bonding the materials with epoxy clay, I realized there is a symbolic relationship between the making of the objects and my hybrid identity. I see my work as a visual manifestation of the hybridity inherent within languages and cultures”. This solo exhibition will premier this year at the Fresh as Fruit Gallery in DeLand, Florida. 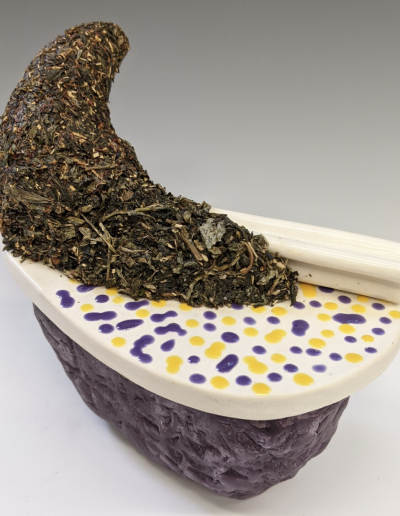 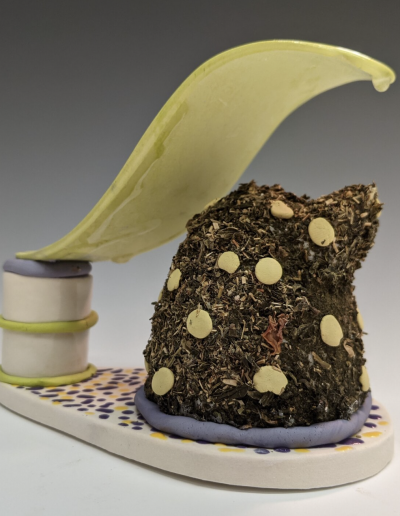 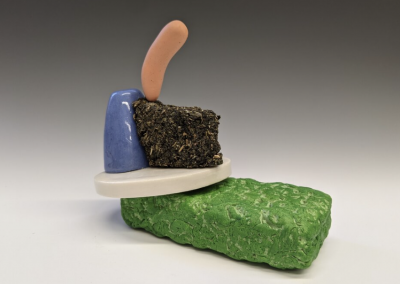 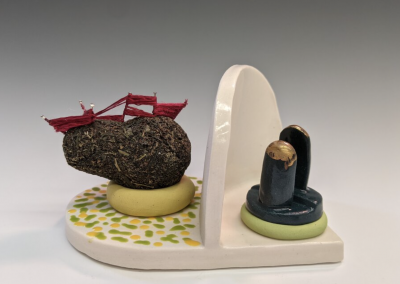 Leung also derives inspirations from those around her and explained that she has learned much from other artists within the industry; “I also learned a lot just from talking to other artists in the field. I talked to other artists on Instagram randomly and see if I can pick their brains”. The importance of materials is a journey that Leung credits one of her mentors for making sure she explored; “One of my professors questioned my material choices. It made me think about the history of my materials and how I can connect with my materials in an intentional way”. Leung hopes to pass this lesson on to other artists and said she would ask emerging artists to question, “How are you connected to your material? Why are you using the material you are using? Does your material choice add to your concept?” She also spoke to the importance of representation in the industry and how that helped inspire and shape her own artistic journey; “Representation matters. Having an Asian professor in my undergraduate program inspired me. Many other professors gave me many opportunities to attend workshops and do a presentation at a conference along the way. I appreciated them”. The road to success wasn’t without obstacles though. Leung explained that she has faced adversity during her ceramics journey and shared that, “Racism was one of the challenges I faced externally and internally. As a person of color, people would comment on how I get opportunities because of my race. I thought about that a lot and even agreed with it at one point. But don’t let that discourage you. Count your accomplishments, recognize your merits, and don’t compare your progress with others”. Despite any and all obstacles in her way, Leung is dedicated to her art and her inspirations, and has carved out her own place within this industry to create a renowned name for herself by creating exquisite pieces that explore important concepts. When asked how she hopes to inspire other artists, Leung said, “I hope one day I can become an artist with a gallery representation or become a full-time art professor”. With incredible insight and a wealth of knowledge to give, Leung’s work is a mere sneak peek at the opportunities and inspirations she will be able to give to other artists in the coming years. In true future educator form, when asked what advice she would give to other artists, Leung gave a list of the most important tips to keep in mind:

It’s clear to all who have the opportunity to see her amazing work that Cindy Leung has honed her ability to weave the important messages of her inspirations into every aspect of her creation process as she continually produces work that takes this industry’s breath away. More importantly, artists like Leung who hope to give back to this community by inspiring and educating other artists are what keep ceramics interesting, diverse, and constantly moving forward. With pieces that are as intricate and mesmerizing as the messages they carry, it’s clear that Leung’s artist journey will only continue to break molds, push boundaries, and find amazing success.

“1. Artists need to be with other artists.  So try to talk to people and make friends at any openings, workshops, and artist residencies.
2. Learn to agree to disagree.  Don’t take rejections personally.
3. Don’t be afraid to talk about your work.  Always helps when you can summarize your project in one to two sentences.
4. Get your business card and website/portfolio ready!
5. Be open-minded and embrace the unknown (this is the hardest).”