Alex Anderson is a renowned ceramicist whose work has piqued interest around the globe. Within the U.S. he has exhibited work at some of the most prestigious museums including the American Museum of Ceramic Art.  His most recent collection, Little Black Boy Makes Imperial Porcelains, was displayed by his representative gallery, the Gavlak Gallery in Los Angeles. Is the ceramics world a place just for beauty and decoration where the debate comes down to expression vs. functionality? Or can it be a place for discourse about real systemic issues; a place where artists can let their expressions and experiences play out unbridled. Can it be a place that welcomes the meaning and the message behind art just as much as it appreciates its’ beauty? This is the balancing act that artist Alex Anderson plays with in his work. When asked about the obstacles he’s overcome, Anderson explained to me that he thinks “the greatest challenge I have faced is believing in what I do as significant beyond myself in a world that until recently, relegated all ceramic objects to the world of decoration rather than meaningful art”.  As a Asian-African American, Anderson speaks to the intersectionality of his identities and experiences through his work while immortalizing the struggle against stereotypes and imperialism, historical and current, in sculptural form that is both beautiful and meaningful. He referred to this quote from Artsy Magazine when asked about his statement as an artist: “Anderson’s pieces destroy the monumentality of sculpture, pointing with derision at the ways that white Western society dresses up its violence and fetishization in pale porcelain.  By breaking those staid forms and dressing their remains in violent rictuses and flowing gilded streams, Anderson is able to make physical the volcanic history always bubbling beneath ceramic skin.” Anderson uses many techniques and themes in his work to paint these broader overarching themes. In an interview with Lala Magazine Anderson explained that “the white and gold aesthetic is all about histories of Western imperialism, and American capitalism Is part of that” and that “this aesthetic indexes to histories of power, imperialism and function to some extent”. The use of blackface is another common artistic theme throughout Anderson’s work and speaks to how black culture has been perceived and portrayed historically, but also the experience of entering white spaces as a person of color. When commenting on his 2019 Pearanoia collection to Cultured magazine, Anderson explained that this not only gives recognition to the fact that stereotypes do exist, but also spoke to his experiences and feelings regarding “potentially confirming those stereotypes, as the white gaze immediately categorizes me with implicit bias”.  Yes, the work is pretty – it’s beautiful, gorgeous, and exquisite. However, It should also invite a feeling of discomfort and you take in the context of the imagery and what the pieces represent; a calculated metaphor speaking to injustices, violence, and the destruction of other cultures that are shrouded behind the “beauty” of imperialism and Western culture. Down to the names of the pieces, everything is meant to evoke a response.  He recently completed his second solo exhibition with the Gavlak Gallery entitle Little Black Boy Makes Imperial Porcelains. Anderson shared with me that he considers this collection to be “one of my more significant contributions to the discourse in that it examined the systemic forces of social, racial, and gender based power captured in the medium, while exploring the aesthetics, presentation, and beauty of ceramics”. 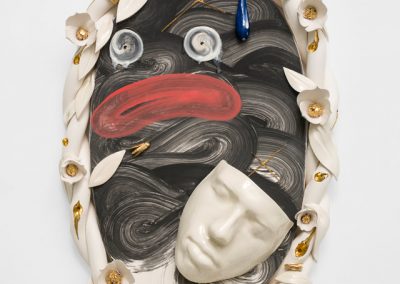 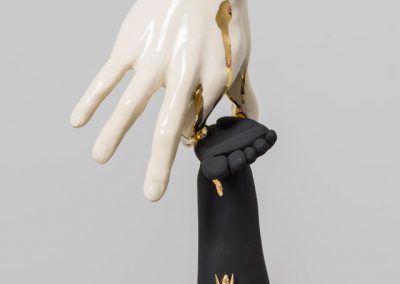 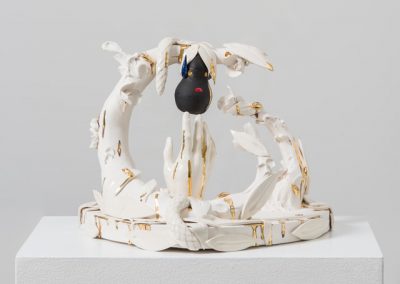 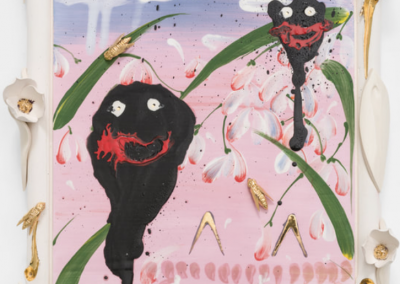 Stains on a Pretty Landscape 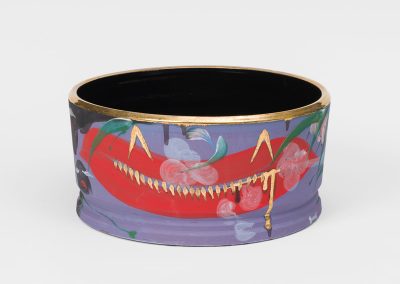 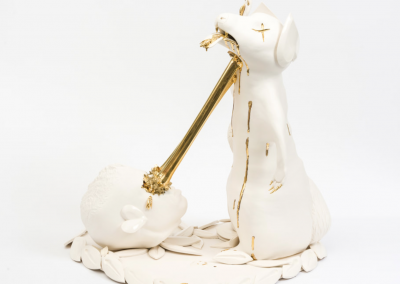 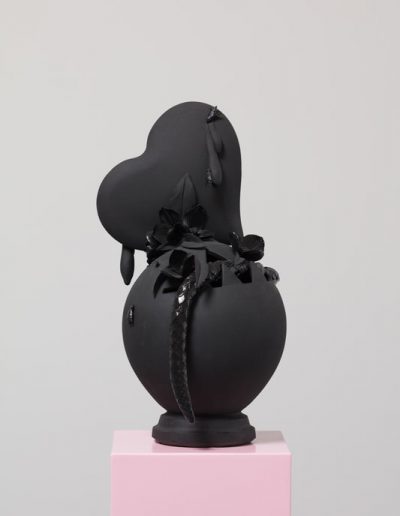 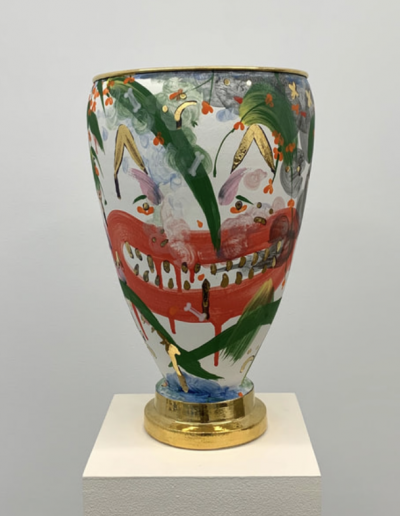 Anderson told me that ceramics definitely wasn’t a choice for him, “I took my first ceramics class in high school and never stopped”. It wasn’t until he got a chance to study the art form in Hangzhou, China that he learned the infinite capabilities of clay. In the LALA Magazine article he described his time there as a “turning point when I realized the material presents you with a lifetime of work – and also a way to translate an entire lifetime through that work because it can take any form”. His passion for the art form has gained him international success and he is considered a force to be reckoned with as a successful emerging artist. Anderson credits ceramic artist Adrian Saxe with giving the greatest challenge as an artist: “Follow your inclinations and make something we’ve never seen before.” After learning about his inspirations and taking a more critical look at his pieces with new-found understanding, it’s clear to me that Anderson is taking that advice and running with it as far as he can.

“My advice to any aspiring artist is to put everything that makes you who you are and everything you have into your practice.  Find all your joy in your practice and feed it by paying attention to the world around you.  I would challenge any art student to push the development of their technical abilities to the greatest extremes in order to remove barriers of their own expression and to understand the full potential of the ceramic medium.”

What do Anderson’s words mean to you?  What makes you who you are and how will you show it to the world?  For this challenge, think about the message you want your piece to convey and create something that is outside the norm of your technical wheelhouse.  Remember to push your abilities to the extremes and create without limits

Anderson hopes to inspire other artists through his own experiences and work. His concepts break the mold for has been deemed “acceptable” traditionally and he has often spoke of the infinite potential of ceramics as an art form. Artists are only bound by the barriers they create for themselves and Anderson hopes to inspire unlimited expression in others while reminding them to take inspiration to the world they live in. He explained that his advice to aspiring artists was “to put everything that makes you who you are and everything you have into your practice. Find all your joy in your practice and feed it by paying attention to the world around you.” When looking at his pieces it’s clear that this is advice Anderson uses in his own life and work, and it’s clear that along with world-success he has also found joy in creating while demanding a public discourse for important issues. Anderson left me with this challenge for growing artists: “to push the development of their technical abilities to the greatest extremes in order to remove barriers to their own expression and to understand the full potential of the ceramic medium”. 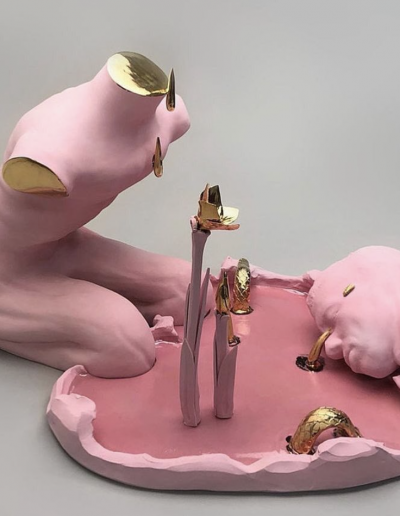 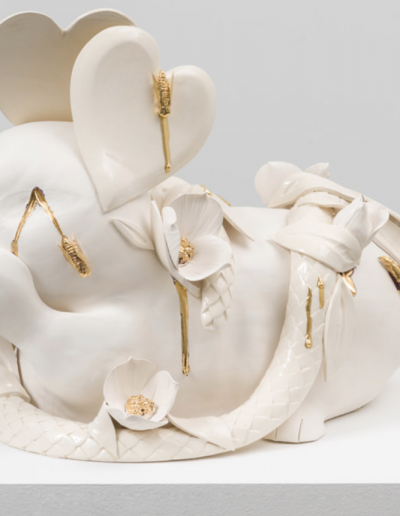 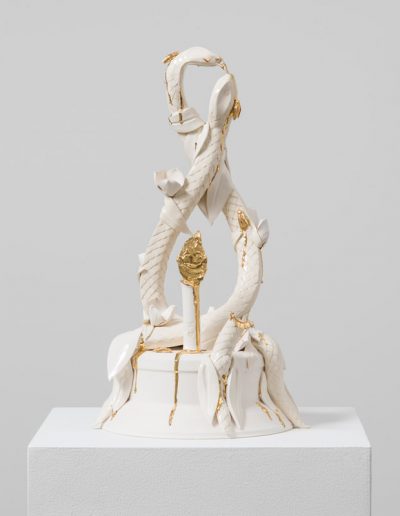 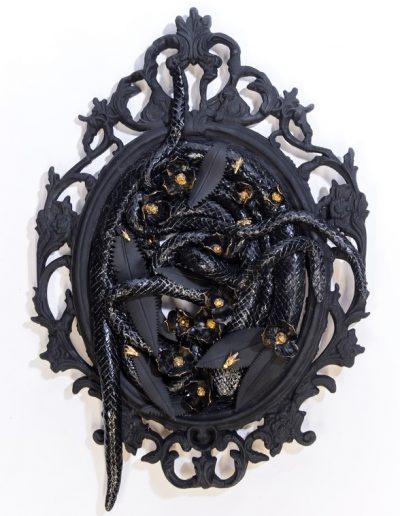