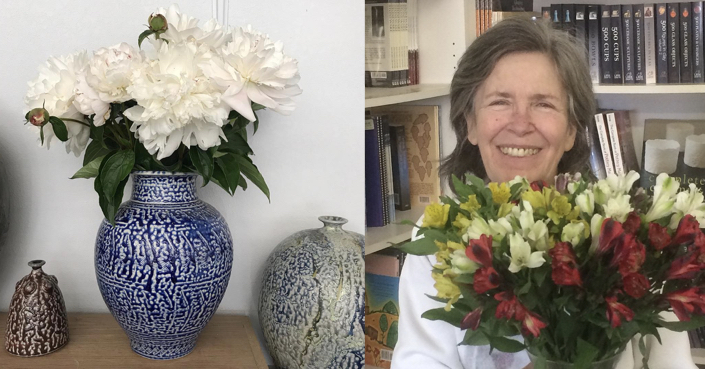 A beatuiful young girl marries a handsome clay professor and together they start a life together, a life of clay, in West Lafayette, Indiana.  Anne Bracker began her clay journey as a special student at Purdue University.  Her coursework included endless glaze tests, studies in form, and repetition of various skills and techniques. Her love was the wheel, and every project, no matter the technique, would have a wheel-thrown element.

Meanwhile, also at Purdue, that handsome clay professor she married in Texas was now the handsome clay professor at Purdue, and while there, he got a grant to build a salt kiln….to build many kilns actually (read the story here). He built many kilns there, including one in their backyard so that Anne could continue her study of the art of throwing while at home.   Anyone who has ever bought a wheel from Anne probably remembers her telling the story of when she first got her very own wheel that Bill brought home for her. It’s never been stated, but the setting up of the home studio probably had something to do with the arrival of first born, Anne Michelle.

In early 1975, on a flight returning from the Flagstaff NCECA, Bill met Sheldon Carey, the soon-to-be-retiring professor of Ceramics at the University of Kansas.  Seated together on the plane, the two had a great conversation.  Little did Bill know, that was a job interview (actually, we’re pretty sure Bill DID know that). He was officially asked to submit an application, was hired and in that summer and the years that followed, Anne learned to love Lawrence.   She loved it so much that she blessed the town with their daughter, Cindy, born the year after they moved here.    While Bill taught at KU, Anne cared for their now two children and continued to pursue an early “both artist and mother” life.  Lawrence was an incredibly welcoming community for potters.  Anne and Bill joined the Lawrence potter’s guild, and soon Anne became treasurer, a position she filled for probably a decade or more.  The love of pottery eventually led to a full time studio practice.  Bill left KU and the two found a vacant building to rent and convert to a studio, where they built also built a salt kiln. Their lives as studio potters continued for around 5 or so years, but over that time period, there were changes….evolutions, if you will.  When Anne and Bill would drive 2 or so hours to get clay in their big van, they would often pick up materials for other members of the potter’s guild.  After a few years of this, they often were bringing back more clay for other people than for themselves.

A shift in income became apparent, with profits coming as much from the sale of raw materials as from finished artwork.  They embraced the opportunity to help out fellow potters by being a central location for supplies.  They started stocking Orton Cones, then some Kemper Tools, and AMACO Glazes, brushes, honey dippers, corks, and other accessories followed.  They would take orders for clay and even wheels, kilns, vents and so on and deliver when in.  Eventually, that endeavor gobbled up most of their time, and they didn’t have as much time to throw pots in that beautiful studio.  They were also running out of room, and had much greater need for storage space.  They found a warehouse, just a quarter mile away from their studio, bought it, and moved in.  They both continued to share the hope of sneaking away to the studio to make pots in the middle of the day if business got slow.  But it just got faster.  A part time employee was hired, and then another, and then a few more.  Truckloads of material were being ordered from the mines, Bill was out deliverying clay to schools as much as he was in the warehouse,  Anne managed the finances, and “Bracker Ceramics,” as it was known then, a holdover from the salt glaze pottery days, continued to grow.

As most people know, in 1993, Bill passed away.  I don’t believe that it is an exaggeration to state that the entire greater Kansas City clay community grieved. Bracker’s was closed for probably a couple of weeks.  I don’t really remember.  But in short time, Anne was back at work, determined to continue to care for the business that she and her husband created.  It saddens me to say that there were several people in this area or industry who were placing bets or exchanging predictions of how long it would be until Anne folded or sold.  Let this be a lesson, never bet against a Bracker.  Under Anne’s leadership, Bracker’s flourished. Bracker’s had been a sole proprietorship.  In the wake of Bill’s death, Anne incorprated the business and changed the name to Bracker’s Good Earth Clays, Inc. Not long after, construction began on a new building that would triple their current size and allow them to better serve their customers.  In 1999, Bracker’s moved into “its new digs,” just after the Ohio NCECA conference.   With more space, Bracker’s was able to support more artists, universities, schools, potters, arts centers and so on; growth continued, still under the keen business mind of Anne Bracker.

The next big development started brewing about 15 years later.  Les Byer, of Flint Hills Clay Works, was considering retirement and casually floated the idea of selling his business to Anne.  The rest happened almost in a blink.  Plans for building expansion were drawn up, guiding documents for a new company were drawn up, bank loans were drawn up, and sale documents were drawn up.  The exciting news was announced to the public in 2016 at the Kansas City NCECA Conference.  At this same conference, Anne, along with her husband Bill, were honored by NCECA with the Regional Award of Excellence.  In 2017, the first batch of clay was mixed here.

Again, Anne’s guidance and deep understanding of clay, business and management helped the clay mixing branch get off to a thoroughly successful start.  It has been *almost* 3 years exactly since that first batch was mixed, if i had to guess, I’d say we’ve mixed 2250 batches of clay since then, which would be just under 3 million pounds in just under 3 years.  So no wonder you’re ready for retirement, Anne.  That’s a lot of clay!

To honor Anne and her retirement, we dug into our video vault and found some clips of Anne’s second saturday demonstration from back in 2012.  We present it for you here, LARGELY UNEDITED to capture all of Anne’s wonderful storytelling skills.  It’s always an enjoyable journey to listen to Anne talk.    Below that, you can also enjoy a journey through some past pictures of Anne’s 50 years in clay (We skipped the first 25 years of her life, “BC” (before clay)

If you want to wish Anne a happy retirement, feel free to mail her a card here at Bracker’s.  We’ll collect them and take them to her.  And believe us, when Covid-19 is behind us, and we can all gather together, we will be throwing a belated retirement party, and you are ALL invited!

Mom’s office in the old building

The 1994 crew, back in the old warehouse when it was still Aqua 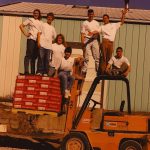 Another shot of the 1995 crew, very safely standing atop the forklift.

Vegas NCECA with David Gamble and a Brent Wheel

With Marko Fields at NCECA in Fort Worth

From the Fort Worth NCECA with David Gamble from AMACO/Brent

Mom, sitting in the little bucket of a backhoe during construction fo the “new” building

Mom in her “new” office in the “new” building

Skutt part at the 2003 NCECA in San Diego

The Belle of the Louisville NCECA 2007

with the NCECA board June 2015

with Dave in the Warehouse

At our 30th anniversary party with former employee Dave Root 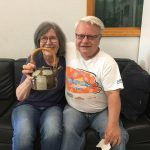 With Topeka Potter Larry Peters, and the Teapot he gave her to add to her collection

Mom in the breakroom probably last winter with her granddaughter, Sophie